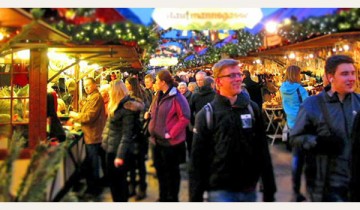 In recent years the European-style or European themed Christmas market has seen a massive surge in popularity throughout North America. As soon as December arrives, Christmas markets pop up throughout a host of American cities selling German-inspired bratwurst, mulled wine, and of course sweets, Austrian and Belgian chocolates, and a host of wooden handicrafts similar to those you would find across festive markets in Europe’s chicest cities. The Christmas market concept originated in Germany (where they are called Christkindlmarkt) in the 14th Century when the very first Christmas market as we understand it was held in Dresdner, and this time honored tradition quickly spread throughout Europe before making its way across the Atlantic in more recent times and being taken into the hearts of the American general public.

Christmas markets have seen a monumental rise in popularity as a way to combine food with music and entertainment, and a great place for people to meet and get together in an informal environment over the holiday season. One of the first cities to embrace the European Christmas market concept was Chicago, which is now celebrating its nineteenth annual Christkindlmarkt and more and more American cities are following suit. It is expected that there will be at least 100 Christmas market style gatherings and celebrations across the country this year and the concept is one that is still continuing to rise in popularity and explode across our collective consciousness. Visit your local Christmas market and you can expect to find a wide array of delicious food stalls (ranging from imported German delicacies to locally sourced produce) and many markets also combine ice skating rinks and other forms of entertainment with their celebrations. In a society that is becoming increasingly disillusioned with the corporate commercialization of Christmas and the constant push from large retailers to buy meaningless and expensive holiday gifts, the idea of doing your Christmas shopping within a more intimate environment where the gifts on offer have been handcrafted with love is an increasingly appealing one. This no doubt explains why the retail side of the European Christmas market experience is one that is so popular in Northern America right now.

Of course, whilst they are created in homage to the authentic Christmas markets you would find across Europe (and particularly in Northern Europe), the markets you will visit in America and Canada are very different from the authentic markets you will find in Europe, particularly in Germany. North American Christmas markets tend to have a more modern carnival atmosphere and they struggle to capture some of the more traditional and unique elements of the German market experience. Each German market focuses on its own regional traditions and specialties (such as the the Christkind - or Christ Child who opens the market in Nuremberg by reciting poetry or the Dresden traditional of baking the city’s largest fruit loaf whilst the market is taking place). These unique aspects of the traditional German Christmas market are difficult to capture and translate simply for a wider audience living outside of Germany. Around 1500 Christmas markets take place in Germany every year. These vary wildly in size and in visitor numbers, with the largest attracting tourists from all over the world travelling great distances to indulge in the fun of the Christmas market shopping and atmosphere, and the smallest simply acting as a place for local villagers to gather and meet whilst sharing in the festive spirit. There are a similar number of markets taking place in Belgium and the Netherlands too, and each of these markets will also have its own traditions in place. These is no more magical or festive time to visit Europe than in December when each city twinkles with the lights of their holiday decorations and Christmas markets take place all around you. Why not use your next international vacation to compare your local Christmas market to the real thing? You certainly won’t be disappointed.

What Do Customers Say?